Oh How I've Missed You

I've missed Photo Story Fridays. I really have. I've missed telling part of the story of my family, illustrated in the unique way only my kids seem to be able to inspire.

So in thinking about what I could jump back in with, I was going through a lot of ideas. I've done a lot of PSF's about Jock. Quite frankly, he's easy to write about. Never a non-memorable moment with that teenager. I've probably got at least half a dozen different things I could embellish on right at this moment. (For instance, did you know that getting a girlfriend, one that you keep for over a month and invite to spend a Saturday evening at your house hanging out and watching movies with your family, is apparently a wonderfully huge incentive to clean your room? And I mean CLEAN, as in move furniture, throw away ALL trash, vacuum and take dishes with strange science project type things growing on them to the kitchen type of clean? If you don't yet have a teenager, I'd suggest you remember this tidbit and pull it out at some point in the future.)

Bug is always good for a laugh, or one of those smiles that make you feel like you're both laughing and crying at the same time. (He's been borrowing Jock's portable CD player to take to school the last few days, as he's "reading" a book on CD -side note? Excellent part of his 504 Plan! He still follows along with the CD in the book, and doesn't get bored because the story is being acted out as they read.- and his own disc player is somehow missing the battery casing back. He discovered Jock's disc player was NOT in his backpack tonight, and called me in tears. Turns out Jock had actually gotten in the backpack and taken it out himself, but Bug was scared to ask him, because if Jock HADN'T been the one to take it.... well, Bug would have just alerted his brother to the part where the CD player was missing, now, wouldn't he?)


I even get the occasional good story out of something Coach has done. (You know he's out of work, right? Well, I came home tonight to an awesomely sparkly kitchen. He even pulled out the stove and cleaned under and around it. The thought of what he saw terrifies me. On the other hand, apparently inviting the teenager's girlfriend over for an evening, in addition to inspiring a clean room for the teenager ALSO inspires dads to get in touch with their inner MollyMaid.) 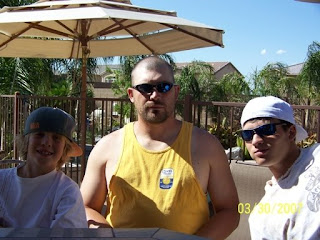 Just look at these three. Can you blame me for constantly using them to illustrate my life? It's fitting, since they ARE my life.

Hosted by Cecily and MamaGeek
Ramblings from The Sports Mama at 9:58 PM

Labels: Can't live with 'em but you can't eat 'em either, I Think I'll Keep Him, Photo Story Friday, The Trials of Being Boys

I have 3 sports loving, male offspring myself......I love your stories!

I will be back for a visit very soon :-)

Have a fantastic weekend!

I love that all the "boys" in your house were preparing for a new girl!

My Little Guy loves the books on CD. Has since he was little, and will check out library books that way pretty exclusively. His social studies book is online in auditory format, too! Totally rocks.

My son is still only 2 but you've given me some insight into what could happen in the future :)

MIA or not, I am still in love with you and your three men!

Sounds like you got yourself one good life out there. You go sportsmama!

oh, and NOPE don't blame you one bit. The girlfriend alone is a fantastic source of huge grins for me.
Can't wait until he falls 'in love'!!!! How fun! 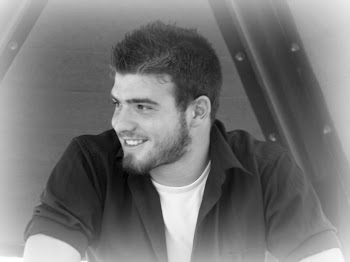